We regret to inform you that effective immediately, we must cease distribution of some forms of edibles from our menu.

The City of Vancouver has stipulated in order to comply with their new medical marijuana-related business licensing policies and to keep our doors open, “all edibles, except for oils, tinctures and capsules, are no longer permitted to be sold”.

As such, we can still offer a variety of beautiful infusions, and our staff will provide all the support needed to empower your self-titration as you adjust your dosage and find effective relief while switching to a new product.

As always, we are honoured to provide any member who needs guidance or support regarding dosaging, titration, recipes, or any other questions you may have about your medicine.

We acknowledge this regulation does not comply with the recent Supreme Court ruling, declaring all medical cannabis products to be legal for patients to use; however we are compelled to comply with the city’s requirement. We are working with them to find a way to stay in our current location, keep our doors open and to continue to provide you with the wide variety of healthcare services we are currently offering.

Thank you all for your continued support during this time. We love you!

In Solidarity,
All BCCCS Staff and Board

The British Columbia Compassion Club Society expressed appreciation for Vancouver City Council’s historic move yesterday, when it voted to regulate medical cannabis dispensaries. “We are proud of our city right now and at the same time we are deeply concerned about being forced to move which would likely close our doors and interrupt subsidized healthcare services for our 6000 patients,” said Jamie Shaw, the group’s spokesperson.

Vancouver is following US states like New Jersey and New Hampshire that adopted the compassion club model years ago, with the creation of a ‘compassion club’ designation in the new licensing system. Shaw said “It’s nice to see some regulation in place that encourages more dispensaries to follow the model of providing low cost healthcare services subsidized by the cannabis distribution; but we do still have some serious concerns.”

She said the BCCCS is looking at ways that it can continue to serve it’s members while being compliant with the new regulations, but added that the requirement to move may end up bringing about the end of the organization. “After 18 years of responsibly serving our community and making significant lease-hold improvements in our present location, forcing us to rip up our roots and abandon our community, while competing for a new location with other dispensaries and anyone who decides they now want to be in this field, will likely represent an insurmountable challenge.”

The BCCCS is required to move because we are within 300ft of a private school. The school has written letters of support, brings their students in for tours and in 14 years of being neighbours, we have built a mutually beneficial relationship. As councilor Reimer said in the hearings, we have significantly benefitted our neighbourhood.

“It was surprising to see that Councillor DeGonova stated she did not support these by-laws in part because the BCCCS would have to move, yet she did not floor an amendment that could have kept us in our home.”

The BCCCS said its still hopeful councilors like DeGenova are working towards a solution, and doesn’t believe it was Council’s intention to disrupt Vancouver’s longest running dispensaries.

The British Columbia Compassion Club Society has been a registered non-profit society since 1997, and promotes access to cannabis as part of a holistic approach to health.

“This is yet one more case that shows why Compassion Clubs exist,” said Jamie Shaw, a spokesperson with the group. “Dispensaries have consistently had charges against them dropped; growers have consistently been granted discharges; and our reasons for civil disobedience have been constantly validated by the courts,” she said.

In the case of R v Smith the Supreme Court found that the ‘effects of prohibition contradict the objective of public health and safety’, and that ‘by forcing a person to choose between a legal but inadequate treatment and an illegal but more effective one, the law also infringes security of the person.‘

The ruling also states that liberty is limited ‘by foreclosing reasonable medical choices through the threat of criminal prosecution‘. Shaw believes that the same holds true for patients who are forced to choose between the legal, but inadequate Health Canada program, and the illegal effective dispensaries.

“These three findings perfectly encapsulate why we exist, an,” Shaw said, adding “We sincerely hope that these findings are applied to the issue of access as well, so that, patients are no longer forced to choose between the inadequate but legal Health Canada program or illegal dispensaries that provide education, support and other services.

She expressed disappointment that the court didn’t accept Mr. Tousaw’s suggestion to simply remove cannabis from the Controlled Drugs and Substances Act.

“It means we won’t be seeing any clarity any time soon.” Shaw said, “It may be some time before workable, constitutional regulations are developed by Health Canada.”

The BC Compassion Club is a non-profit organization founded in 1997. It is the longest-running dispensary in North America.

We had a lot of demand for our exclusive cannabis-infused sore muscle rub to be carried by the dispensary.

We’ve responded and here it is! Members of the BCCCS can now purchase the rub on the dispensary side. 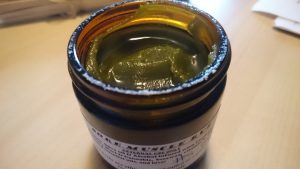 The Compassion Oil is made using a similar extraction method as Phoenix Tears, but with food-safe ethyl alcohol

Over the past few years we have been asked to carry Phoenix Tears. We do not because:

In order to address the above concerns we are introducing our own Compassion Oil which is:

Note: This is highly concentrated medicine. Start with an extremely small dose.

How to Grow Medical Marijuana by Todd McCormick

The Cannabis Breeder’s Bible: the Definitive Guide to Marijuana Genetics, Cannabis Botany and Creating Strains for the Seed Market by Greg Green

Weed, Need and Greed: A Study of Domestic Cannabis Cultivation by Gary Potter

If your membership expired less than six months ago, simply renew the next time you visit the Club.

If your membership has lapsed for more than six months, please call reception regarding your reactivation. There may be a delay before being able to access your membership again.

Donate
to
The BC Compassion Club Society

Your donation subsidizes holistic healing services for some of the most in need. Thank you for supporting our community health model.